JETRO rates Pakistan as the top destination for Japanese Investors

(27-02-2018) Minister of State and Chairman, Board of Investment (BOI), Mr. Naeem Y. Zamindar, who is visiting Tokyo, met Mr. Kazuyuki Yamazaki, Senior Deputy Foreign Minister of Japan. Matters of mutual interest came under discussion. Chairman BOI informed Mr. Yamazaki that Pakistan is aiming for a 9% economic growth rate by 2020 and there was a general consensus across political spectrum in Pakistan on achieving sustained economic growth. He also echoed Price Waterhouse coopers projection that Pakistan will be joining G-20 by 2030. 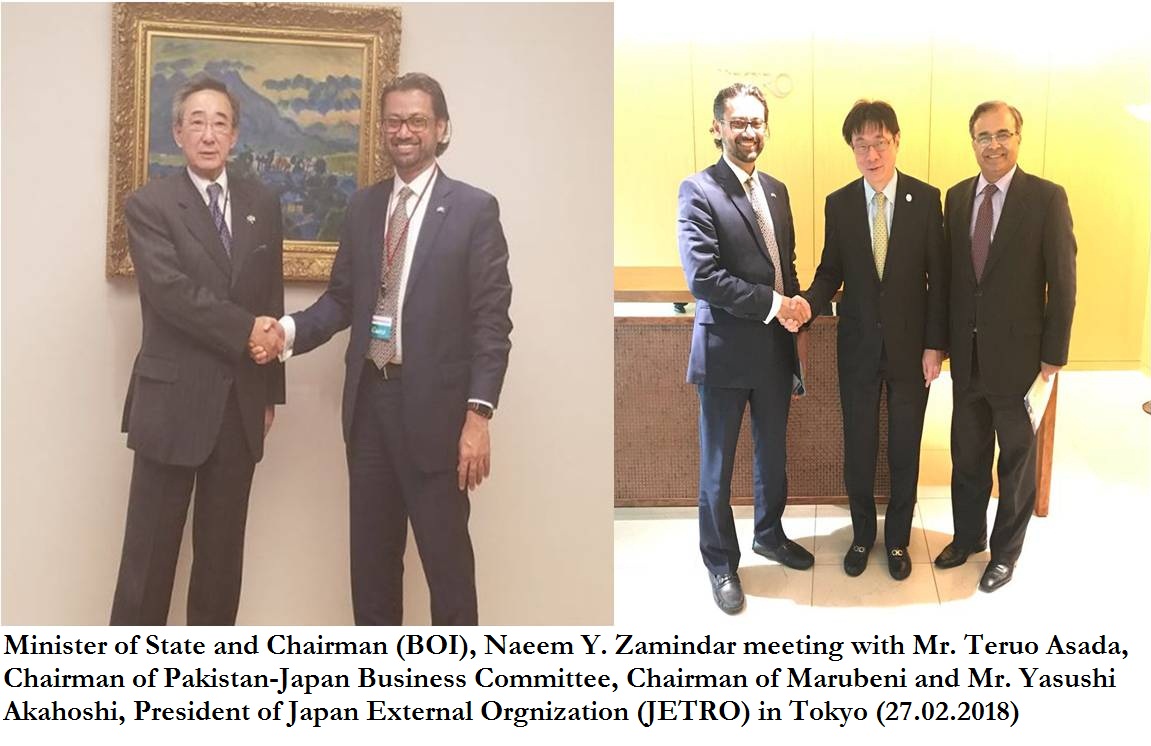 Mr. Yamazaki welcomed Chairman BOI to Japan and said that Pakistan-Japan relations have a long history. He remarked that given Pakistan’s low labour cost and large and young population, it represents an attractive environment for Japanese investors. He underscored that there was potential for mutual cooperation between Japan and Pakistan. It was agreed that the forthcoming High Level Economic Policy Dialogue provides a good platform to continue the conversation on how best to realize this potential.

Minister of State also met with Mr. Yasushi AkahoshiPresident of Japan External Trade Organization (JETRO). Mr. Akahoshiapprisedhim of JETRO’s activities in promoting trade and investment cooperation between Japan and Pakistan and presented the results of JETRO survey of Japanese companies in Asia released this month. In the survey, Pakistan was rated at the top in Asia by Japanese companies for expected profits in 2018, plans for expansion of operations and hiring of local labour force. These results indicate high confidence of Japanese companies in future economic prospects of Pakistan and quality of labour force.

In a meeting with the Minister of State, Mr. Teruo Asada, Chairman of Pakistan Japan Bossiness Cooperation Committee and Chairman of Marubeni Corporation stressed the importance of continuing high-level engagement between the governments and businesses of the two countries and discussed the scheduling of the next round of Joint Government Business Dialogue later this year.