Pakistan has always emphasized the necessity of a meaningful, constructive and result oriented dialogue to resolve the Jammu and Kashmir dispute. Pakistan maintains that rigidity and aggression must give way to accommodation and lexibility.

In their struggle for self-determination, the Kashmiri people have undergone untold sufferings and hardship over the years. Pakistan believes that the Kashmiri people must be associated with the Pakistan-India dialogue process for arriving at a sustainable solution. Their legitimate aspirations cannot be ignored and must be accommodated in any just and durable solution. 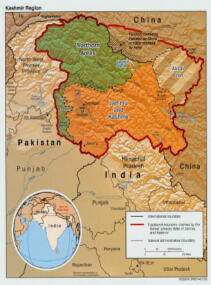 The Kashmir dispute between Pakistan and India dates back to the partition of British India into two independent states in August 1947. At the time, the princely states under British suzerainty but not directly ruled by the British Government opted for joining either Pakistan or India taking into account their contiguity to one or the other country and the wishes of their people.

In the case of Jammu and Kashmir , the ruler was Hindu while the population was overwhelmingly Muslim and wanted to join Pakistan . India consistently pressurized the Hindu ruler to accede to India . Apprehending that the Hindu ruler was likely to succumb to Indian pressure, the people of Jammu and Kashmir rose against him, forcing him to flee from Srinagar . On 24 th October 1947 they formed their own government. On 27 th October, the Government of India announced that the Hindu ruler had acceded to India . This claim was made on the basis of a fraudulent instrument of accession. India sent its forces into the State and occupied a large part of Jammu and Kashmir . Indian leaders, including Prime Minister Jawaharlal Nehru and Viceroy Lord Mountbatten, solemnly declared that the people of the State would decide the final status of Jammu and Kashmir . For over half a century, the Kashmir dispute has bedeviled relations between Pakistan and India . Several efforts, for resolution of the issue, both at multilateral and bilateral levels have failed to show any meaningful result.

India took the matter to the UN Security Council in 1948. The UN Security Council through its Security Council resolutions No. 47 (1948), 51 (1948), 80 (1950) and the United Commission for India and Pakistan resolutions of 13 August 1948 and 5 January 1949 declared that accession of Jammu & Kashmir to India or Pakistan should be decided through the democratic method of a free and impartial plebiscite. These UN resolutions were accepted by both India and Pakistan . Prime Minister Nehru declared before the Indian Parliament that India was committed to holding a free and fair plebiscite in Kashmir . However, India reneged on its commitment to hold plebiscite on the pretext of this stance.

In 1951 India projected the rigged assembly elections in the Indian occupied Kashmir as a substitute to the UN sponsored plebiscite. However, t he UN Security Council Resolution No.91 (1951) denied the authority of the Constituent Assembly to decide about the future of the state and reminded the parties that the final disposition of the state of Jammu & Kashmir is to be made in accordance with the will of the people of Kashmir. The UN Resolution No.122 (1957) reaffirmed the earlier resolution of 1951 stating that the elections could not be held as substitute to the plebiscite.


India now claims that Kashmir is an integral part of India. This contention is misleading and incorrect because of the following reasons:

Outside the UN, direct negotiations between Pakistan and India were held from the very inception of the dispute in 1947. Several rounds of negotiations held during the past five decades have not resulted in any meaningful or substantive progress as India adamantly maintained that the status quo cannot be changed.

Over half a century, the people of Kashmir are awaiting the exercise of their right to self-determination. Non-implementation of the Security Council resolutions coupled with the massive violations of the human rights by the Indian Security Forces has compelled the people of IoK to resist Indian occupation.

In 1989, the people of Jammu and Kashmir, inspired by similar movements for freedom in other parts of the world, rose against the Indian occupation. India sought to suppress their movement with massive use of force, killing hundreds of innocent men, women and children.

Since 1989, more than 90,000 Kashmiri people have been killed. There are over 700,000 Indian troops in IOK. There have been numerous cases of human rights violations. Inspite of the brutal repression of the Indian Security forces, the peaceful struggle of the Kashmiri people continues undaunted.

In an attempt to malign Pakistan and the Kashmiri freedom movement, India has stepped up its propaganda of cross LOC infiltration from Pakistan and our involvement in so-called cross border terrorism. These allegations are nothing but a ploy to shift focus from the massive violation of human rights being perpetrated by the Indian Security Forces in IOK. While making such baseless allegations, India refuses to allow a neutral mechanism to investigate these charges.

Pakistan has all along emphasized the need to further strengthen and enhance the monitoring of the LoC by the United Nations Military Observer Group in India and Pakistan (UNMOGIP). UNMOGIP is the UN's oldest peace-keeping peration.

After a long period of heightened tension and stalled dialogue, the Prime Minister of India, Mr. Atal Behari Vajpayee visited Islamabad on 3 ? 6 January 2004 to attend the 12 th SAARC Summit. In a joint statement issued on 6 January, 2004, the President of Pakistan and the Prime Minister of India agreed to commence the process of the Composite Dialogue. The Joint Statement also committed the two countries to find a permanent solution to the Jammu & Kashmir dispute acceptable to all parties.

The Composite Dialogue that commenced in February 2004 between Pakistan and India is a means to achieve a just settlement of the Jammu and Kashmir dispute in accordance with the aspirations of the Kashmiri people. Earlier, Pakistan had set the stage for the resumption of the dialogue process by announcing a vital CBM in the shape of declaration of a unilateral cease-fire across the LOC in November 2003.

All Kashmir related proposals demonstrate Pakistan's sincere desire and reflect flexibility and readiness to take bold initiatives. Given sincerity, flexibility and courage on both sides, it should be possible to move forward towards a just settlement.

The Pakistani side has urged India to move forward together with Pakistan in a search for a final settlement that is acceptable to the Kashmiri people. We have also reiterated in unequivocal terms that the Jammu and Kashmir issue is the core issue, which cannot be sidelined and put on the backburner.

In addition to the Composite Dialogue, the two sides have agreed on a number of Kashmir-related Confidence Building Measures (CBMs), including intra-Kashmir bus and truck services, opening of crossing points on the Line of Control (LOC), meeting points for divided Kashmiri families on the LOC and greater interaction among Kashmiri leadership on both sides of the LOC. These CBMs have improved the political atmosphere in the region, which together with conducive international environment, offer a unique opportunity for both Pakistan and India to resolve the Kashmir dispute. While the CBMs have their importance, progress towards a settlement alone will raise hopes, reinforce confidence in the peace process and discourage violence and militancy that has persisted since 1989 largely as Kashmiri reaction to human rights violations and heavy Indian military presence in IOK.

On 11 July 2006 India used the Mumbai blasts to postpone the Foreign Secretary level talks to review the 3 rd round of the Composite Dialogue. India blamed elements from Pakistan for their involvements in the blasts. The Indian decision to put on hold the Foreign Secretary level talks has been seen as a negative development by Pakistan and the international community. The Indian decision was also at variance with the Joint Statement issued on 18 April 2005 by the leaders of Pakistan and India that “terrorist acts would not be allowed to derail the peace process”. While Pakistan has condemned the terrorist attacks in the Mumbai at the highest level and has offered assistance in investigating the blasts, India continue to point fingers at Pakistan.

Progress towards a settlement should not be linked to sporadic terrorist incidents anywhere in Indian occupied Kashmir or India. This would only add to the frustration of the Kashmiris who continue to suffer heavy Indian military presence, human rights violations and harsh laws, such as J&K Public Safety Act and Armed Forces Special Prevention Act. These gross human rights violations have been documented by Amnesty International and Asia Watch.

President Musharraf has emphasized the need for “out of box thinking,” sincerity, flexibility and courage to address this dispute. He has stated that a solution of this dispute must be acceptable to Pakistan, India and most importantly, the people of Jammu and Kashmir.

Pakistan has never shied away from bilateral engagement with India of which the ongoing Composite Dialogue is a manifestation. We hope that the process of composite dialogue will lead to peaceful settlement of all bilateral issues, including Jammu & Kashmir, to the satisfaction of both sides. Only a constructive dialogue would promote progress towards the common objective of peace, security and economic development of our people and for future generations.