Chairman Board of Investment Pitches for enhanced Japanese Investment in Pakistan

(26-02-2018): Minister of State and Chairman Board of Investment, Pakistan, Mr. Naeem Y. Zamindar, who is visiting Japan, today addressed a special meeting of the Keidanren on emerging business and investment opportunities in Pakistan. Keidanren is the premier institutionrepresenting business and industry in Japan. Mr. Kiyoshi Miyake, Chair, Policy Sub-Committee, Committee on South Asia, Keidanren in his welcoming remarks thanked Mr. Zamindar for visiting the Keidanren and giving a special briefing on Pakistan’s economy and investment framework. 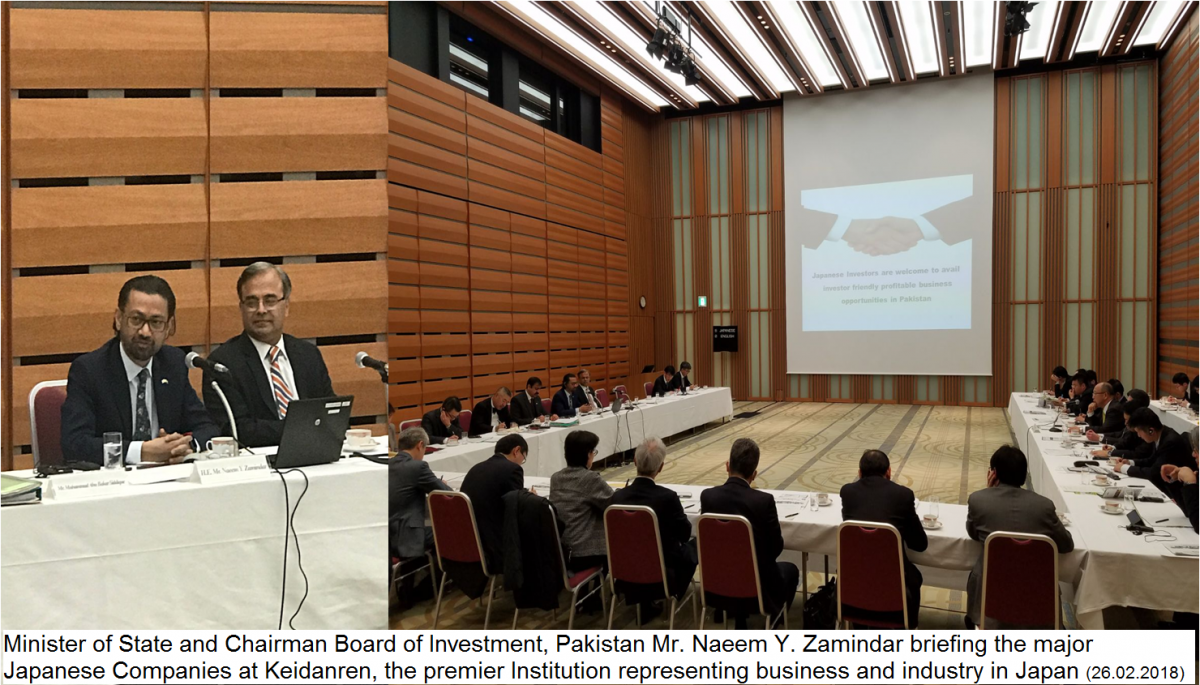 Speaking to the members of the committee on South Asia, Mr. Zamindarsaid that Pakistan’s location on the cusp of important economic regions, young population and skilled labour force supported by very rapidly growing technology infrastructure made Pakistan a very attractive destination for investment not only for domestic market but also as a production and export hub for rest of the world.He said that with improved security and a sustained economic turn around Pakistan is open for business. Japan with its historical business and economic linkages and the high regard that it enjoyed in Pakistan was best placed to avail of the emerging potential and opportunities. Pakistan, he said, would welcome Japan’s investment and BOI would offer every facilitation.

The Chairman BOIfurther noted that government is committed to making Pakistan a business friendly country. Foreign investment in Pakistan is protected by rigorous laws and FDI regulations allow full repatriation of capital and profits in almost all cases. Pakistan is rich in agricultural and mineral raw material. This is now supported by fast penetration of access to technology. Number of mobile phone holders increased 100 times between2003 to 2008 and number of bank account holders is expected to increase 8 times to 80% of eligible population in 3 years. The business environment is also helped by vast improvement in security situation in last three years. He identified energy, solar panels, electronics, auto, textile, chemicals and plastics and potential areas for Japanese investors and said through facilitation and incentive measures including one window operation and Special Economic Zones Japanese companies will find Pakistan a hospitable investment destination.

Ambassador of Pakistan Asad M. Khan also spoke on the occasion and highlighted the renewed interest in both capitals to further deepen bilateral engagement duly captured by the convening of a number of dialogue processes and the visit of Foreign Minister of Japan Mr. Taro Konoto Islamabad last month. He reiterated that Pakistan firmly believes that common adherence to the ideals of peace, democracy, freedom and rule of law and shared commitment to promoting peace and security and expanding and deepening bilateral trade, investment and development cooperation provides a strong basis for a comprehensive, sustainable and mutually beneficial partnership between Pakistan and Japan.

Mr. Miyakeconcluded the session with the hope for stronger economic relations between the two countries.