The national flag of Pakistan (Urdu: پاکستان کا قومی پرچم‎) was adopted in its present form during a meeting of the Constituent Assembly on August 11, 1947, just three days before the country's independence, when it became the official flag of the Dominion of Pakistan. It was afterwards retained by the current-day Islamic Republic of Pakistan. The flag is a green field with a white crescent moon and five-rayed star at its center, and a vertical white stripe at the hoist side. Though the green color is mandated only as 'dark green', its official and most consistent representation is Pakistan green, which is shaded distinctively darker. The flag was designed by Amiruddin Kidwai, and is based on the All-India Muslim League flag.
The flag is referred to in the national anthem as Urdu: پرچم ستارہ و هلال‎ Parcham-e-Sitāra-o-Hilāl (lit. Flag of the Crescent and Star). It is flown on several important days of the year including Republic Day and Independence Day. A designer named Amiruddin Kidwai studied the League’s flag, as he tried to design a flag for a new, independent nation. Finally he arrived at a design, and he presented it to the men who would run the new Pakistan government. The Pakistan government adopted his design on August 11, 1947. The Pakistan government has pronounced rules about the flying of the Pakistan flag. The government has called for display of the flag at full mast on March 23 of each year. That display recognizes both the adoption of the Lahore Resolution in 1940 and the Declaration of the Republic of Pakistan in 1956. Flag raisers in Pakistan also make a point of hoisting the flag each year on the fourteenth day of August. That is considered to be Pakistan’s Independence Day. Pakistan was carved out from British India as a home to Indian Muslims.

The green represents Islam and the majority Muslims in Pakistan and the white stripe represents religious minorities and minority religions. In the centre, the crescent and star which is traditional symbol of Islam symbolizes progress and light respectively. The flag symbolizes Pakistan's commitment to Islam and the rights of religious minorities. It is based on the original flag of the Muslim League, which itself drew inspiration from the flag of the Sultanate of Delhi and the Mughal Empire in India and the flag of the Ottoman Empire. 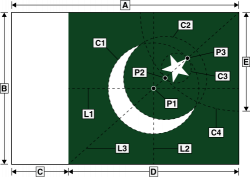 According to the specifications it is a dark green rectangular flag in the proportion of length [A] and width [B] as 3:2 with a white vertical bar at the mast, the green portion bearing a white crescent in the centre and a five-pointed white heraldic star. The size of the white portion is one quarter the size of the flag [C], nearest the mast, so the green portion occupies the remaining three quarters [D].

The Interior Ministry of Pakistan provides dimensions for flags in different circumstances:

In early 1948, A. R. Ghani, a Muslim from Transvaal, South Africa, offered two prizes of five thousand rupees each for the poet and composer of a new national anthem for the newly independent state of Pakistan. The prizes were announced through a government press advertisement published in June 1948. In December 1948, the Government of Pakistan established the National Anthem Committee (NAC) with the task of coming up with the composition and lyrics for the official national anthem of Pakistan. The NAC was initially chaired by the Information Secretary, Sheikh Muhammad Ikram, and its members included several politicians, poets and musicians, including Abdur Rab Nishtar, Ahmad G. Chagla and Hafeez Jullundhri. The NAC encountered early difficulties in finding suitable music and lyrics.

When President Sukarno of Indonesia became the first foreign head of state to visit Pakistan on 30 January 1950, there was no Pakistani national anthem to be played. In 1950, the impending state visit of the Shah of Iran added urgency to the matter and resulted in the Government of Pakistan asking the NAC to submit an anthem without further delay. The NAC Chairman, then Federal Minister for Education, Fazlur Rahman, asked several poets and composers to write lyrics but none of the submitted works were deemed suitable. The NAC also examined several different tunes and eventually selected the one presented by Ahmed G. Chagla and submitted it for formal approval.

The anthem, without lyrics, was performed for the first time for a foreign head of state on the state visit of the Shah of Iran to Pakistan in Karachi on 30 March 1950 by a Pakistan Navy band.

It was later played for Prime Minister Liaquat Ali Khan during his official visit to the United States on 3 May 1950. It was played before the NAC on 10 August 1950.Official recognition to the national anthem, however, was not given until August 1954. The NAC distributed records of the composed tune amongst prominent poets, who responded by writing and submitting several hundred songs for evaluation by the NAC. Eventually, the lyrics written by Hafeez Jullundhri were approved and the new national anthem was broadcast publicly for the first time on Radio Pakistan on 13 August 1954, sung by Hafeez Jullundhri himself. Official approval was announced by the Ministry of Information and Broadcasting on 16 August 1954. The composer, Ahmed G. Chagla, passed away in 1953, before the new national anthem was officially adopted. In 1955, there was a performance of the national anthem involving 11 major singers of Pakistan, including Ahmad Rushdi, Shameem Bano, Kaukab Jahan, Rasheeda Begum, Najam Ara, Naseema Shaheen, Zawar Hussain, Akhtar Abbas, Ghulam Dastagir, Anwar Zaheer and Akhtar Wasi Ali.

The Qaumi Tarana is a melodious and harmonious rendering of a three-stanza composition with a tune based on eastern music but arranged in such a manner that it can be easily played by foreign bands.

The music, composed by the Pakistani musician and composer, Ahmad G. Chagla in 1950, reflects his background in both eastern and western music. Twenty-one musical instruments and thirty-eight different tones are used to play the Qaumi Tarana, the duration of which is 80 seconds.

The Urdu lyrics, written by the Pakistani Urdu-language poet, Hafeez Jullundhri in 1952, have commonality with Persian, making them understandable in both languages. No verse in the three stanza lyrics is repeated.