(18 -11-2016) The Ambassador participated in the interactive Session of the main Opposition Democratic Party (DP) of Japan at the invitation of newly appointed President of the Party Ms. Renho which was held at Parliamentary Museum. The event was attended by a large gathering of diplomats, Parliamentarians, international organizations and the media. 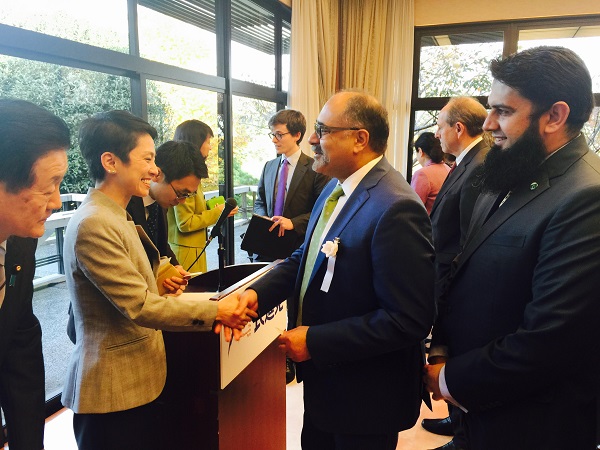 The Ambassador was warmly welcomed by Ms. Hiroe Makiyama, member of the House of Councillors and Director General International Department and Mr. Yukihisa Fujita, member of the Upper House and former State Minister for Finance.

Whilst interacting with Ms. Renho the Ambassador underlined the importance of bilateral partnership in various areas including inter-Parliamentary exchanges, recent high level engagements and efforts to modernize the spectrum of bilateral cooperation.  Congratulating Ms. Renho for assuming the position of President DP, the Ambassador referred to the success of women empowerment in democracy in Pakistan. Ms. Renho appreciated the Ambassador’s participation in the event adding that the DP had history of good relations with Pakistan.