Finance Minister Senator Mohammad Ishaq Dar held a meeting with Chairman, Japan External Trade Organization (JETRO) Mr Hiroyuki Ishiguro here today.  They discussed matters of mutual interest, including increasing the number of Japanese companies in Pakistan, exchange of increased trade and business delegations and increasing the volume of trade between the two countries. Finance Minister stressed the need for increased market access and special tariff concessions for textile products from Pakistan. Referring to textile sector, he requested for provision of level playing field so that Japanese consumers could have access to quality products from Pakistan. He also said that JETRO may increase support for investment related seminars.

Finance Minister further said that keeping in view the history of relations between the two countries and the potential of trade, the current volume of trade was not enough and needed to be increased. He opined that there was tremendous potential for growth of Pakistan-Japan economic relations which should be exploited fully. He briefed the Chairman about various economic measures taken by the present Government to bring the economy back on track.

Finance Minister thanked JETRO for ranking Pakistan as likely to be the second choicest place for foreign direct investment. He stated that Pakistan highly valued its friendship with Japan and underlined the  need to initiate groundwork on Free Trade Agreement.

Referring to the menace of the terrorism, the Finance Minister reiterated the Government’s strong resolve to root out extremism in cooperation with all the opposition political parties and international community. He also appreciated the cooperation extended by the newly elected unified Government of Afghanistan to fight extremism jointly.

Chairman JETRO, while welcoming the Finance Minister, said that JETRO would always be in the forefront in helping Pakistan boost its economy.  He said that JETRO’s support for Pakistan is unshakeable.  Referring to the terrorists attack in Peshawar, he expressed deep condolences for the bereaved families and said that JETRO will continue its support for fighting terrorism and extremism through increasing the business and economic activities in Pakistan.  He said Pakistan is a promising country in the world where middle class would be playing an active role in order to make it a better consumer market.

The meeting was also attended by Chairman Board of Investment, Ambassador of Pakistan in Tokyo and other officials. 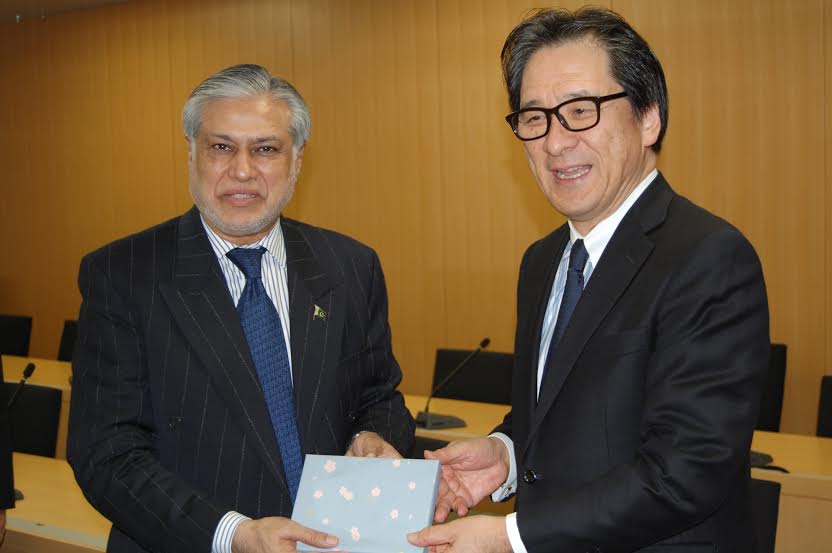